There are a few topics that, when I started this blog way back when (8 years for you pedants out there), I always told myself that I would never write about. The biggest and most significant of those being a coming out blog, but shock horror we did that. I also said that I’d never write about singleness or feminism, mainly because my potentially misinformed and definitely oversimplified two cents didn’t necessarily need to be heard. But I did find myself writing about both of those topics, and I’m not saying that my thoughts set the world alight by any means, but in the end it was a valuable exercise to write about the forbidden things.
There are a few other things on the “no blog” list that will probably stay there, but there is something that I have felt increasingly, uncomfortably, prompted to write about. Even after coming out last year, a blog about being an LGBT Christian was definitely something I told myself I’d never do. Partly because it was something I was still working out myself, but mainly because there were so many other voices already in the conversation, voices I respected, more educated voices with more years of experience both of being a Christian and being gay. But just because there are other voices out there, that doesn’t mean that I have no voice and nothing to say on the matter. And as I’ve said before, this is my blog and I make the rules. So here goes…

When I posted my coming out blog last January, in that one little click of a button my world changed in a very surreal way, because in fact nothing at all changed. Something that had always been true and that I had known since I was 10 was still just as true, nothing changed. But everything changed because suddenly it was no longer something that only I knew, it was no longer a secret that was slowly robbing me of confidence, happiness and identity.

Like I said at the time, I took so long to come out because, while no one ever told me explicitly that two of my identities, being Christian and LGBT, contradicted each other, that was definitely the feeling that I got and what I told myself. I’m not blaming anyone personally, I’m not blaming any one organisation, or book, or piece of teaching, it is just a thing that happened. By the age of 14 of three things I was absolutely certain: I loved God and needed my faith, I was definitely not straight and that these first two things couldn’t work together. Cue 11 years of misery, secrets and heartache.

But in the last few years important conversations have started to happen. Conversations between people who have one or both of these identities and suddenly there isn’t as much doubt over whether you can be both LGBT and have an active Christian faith. And it fills me with hope, enough hope to come out in the first place, but more importantly hope that young people today who identify as LGBT and are Christian won’t feel they have to choose and hope that steps towards even greater equality within the church will happen in my lifetime.

Back in May, I went to see the musical ‘The Book of Mormon’ with friends. This show is almost impressively offensive, definitely not for the faint hearted and about as far removed from your average musical as you can get, but if you can get past all of that (and we could) it is also hilarious, exceptionally clever and has some really poignant points to be made.

One poignant moment for me was the number ‘Turn it off’, a song about the supposed Mormon tendency to try to deny any negative, problematic or “Un-Mormon” thoughts or feelings and turn them off. The oh so catchy chorus tells us: “When you start to get confused because of thoughts in your head, don’t feel those feelings! Hold them in instead. Turn it off, like a light switch just go click! It’s a cool little Mormon trick! We do it all the time. When you’re feeling certain feels that just don’t feel right, treat those pesky feelings like a reading light and turn em off.” One of the things that the song says should be turned off is homosexuality, one character singing about his childhood friend Steve whom he realised he was having “really weird” feelings for. He is accomplished at turning things off and comes out with the classic line: “Turn it off, like a light switch, there its gone! (Good for you!) My hetero side just won! I’m all better now, boys should be with girls that’s heavenly father’s plan. So if you ever feel you rather be with a man, turn it off.”

I guess you might be starting to see why this song struck such a chord with me. I was laughing at this hilarious show and then suddenly it got me right in the feels. I was hit by so many of the lyrics of this song because it was so close to how I lived for 15 years, I thought I had a “Curable curse” and tried to turn my feelings off. I tried to “imagine that your brain is made of tiny boxes, and find a box marked gay and CRUSH IT!” and I know of so many others who have tried to do that too. I can’t speak for the Church of LDS (I don’t know any real life Mormons) and I can’t speak for the whole of the evangelical church or for every gay Christian, but I can speak for me and I know that I spent far too long trying to turn off certain feelings (like a light switch) because I thought they had no place alongside my Christian faith.

I’m currently reading a book called ‘Far from the Tree’, about what the author refers to as horizontal identities. Things, medical conditions and life experiences, that some children and later adults will have as part of their identity that have very little to do with their family or genetics, for example having autism, committing crimes or being LGBT. In the opening chapter I found this thought: “In the Gnostic gospel of St Thomas, Jesus says ‘If you bring forth what is within you, what is within you will save you. If you do not bring forth what is within you, what is within you will destroy you.’ When I run up against the anti-gay positions of modern religious bodies, I often wish that St Thomas’ words were canonical because his message embraces many of us with horizontal identities. Keeping the homosexuality locked away within me nearly destroyed me, and bringing it forth has nearly saved me.”

These two sources, one a ridiculously rude musical and the other a very sensible book on psychology, seem to me to be trying to say the same thing. The things that I finally learnt just over a year and a half ago.

There are always going to be things within us that we feel don’t line up with the way that the world, our families and even we think we should behave. There will be things we think we can’t feel or say as a Christian.

But if the lessons I learnt from 15 years in the closet and from The Book of Mormon taught me anything, it is that God is bigger than homosexuality, God is bigger than almost anything we can throw at him. And we can try to turn it off, thinking something is too big, too messy, too inappropriate to think or feel. But that has the danger of potentially destroying us, throwing our lives into shame and secrecy. Or we can bring it forth, share it with God and watch him do what he does, see him bring beauty from ashes, realise that the thing we always thought counted us out of the kingdom, could be the very thing that makes us loved and lovely.

Later on in the same book I mentioned earlier we read, “Jared Spurbeck, an autistic adult, thought his own quirks were a sign of sinfulness when he was growing up in the Mormon faith; when he started reading about gay Mormons, he found their experience much the same as his. ‘I couldn’t ignore the parallels between autism and homosexuality. Once I’d accepted the one, I couldn’t not accept the other.”

Probably it’s not a matter of sexuality for you (although maybe it is), but what that quote from Jared Spurbeck illustrates is that most of us will have something which we feel needs to be turned off, something that if we push down and deny has the potential to destroy part of our identity.

Maybe today is the day to turn the light on instead, bring something forth from within you, and know that because of, not in spite of, your quirks, foibles and shady patches you are loved and lovely. 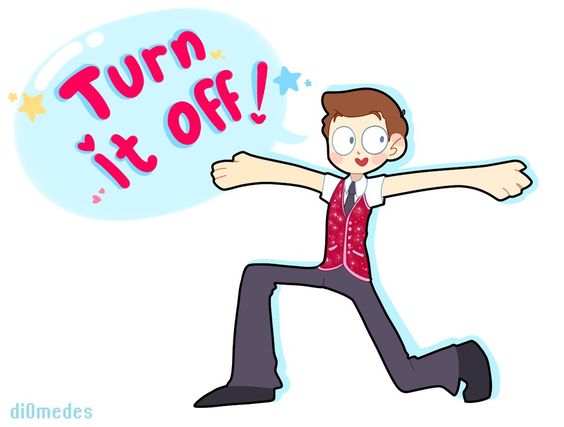