You Make Me Brave…

I’ve got a secret… (ooh it’s been a while since I shared a secret on here, don’t worry this one isn’t quite as massive as the last!)

This particular secret needs to be put in some context, so allow me to set the scene…

A few weeks ago I had an interview. An important one for a job I really wanted. I was desperate for this to be the answer to so many prayers and rekindle in me my faith in my calling and that I could hear from God. You could say there was a lot riding on it! Well thankfully it did go well and as lots of you will already know I got the job and will be starting in September. But the secret comes in just before the interview and is one only a handful of people know thus far.

Yep, that’s right. The interview that was really important, the one that had loads riding on, the one I really wanted and was really happy to get. I nearly didn’t go.

I drove to Berkhamsted, found the school but then couldn’t find the carpark. That darn illusive carpark has so much to answer for, it set of a panic attack of Biblical proportions. I was suddenly struck by how prestigious the surroundings were, how relatively mundane the material I’d prepared for my interview was and how I somehow already knew that they’d hate me. I phoned home in a flap telling my stepmum that I was coming home. Thankfully she managed to talk me round and convinced me to call the school and just ask where the flipping car park was!

The events of that morning got me thinking. You see one of the things that, for me at least, came with a pretty significant bereavement when I was young was a dislike of the word brave. Well, specifically being referred to as brave. There were friends, teachers and people at church who would tell me that I was so brave. I hated being called brave because, A) I didn’t really understand how I was being brave and B) I knew the truth, I wasn’t!

I’m not brave, I’m a massive coward! I’ve written blogs before about my attitude to fear and the things I’m scared of. And this incident with the interview is just testament to that fact. I’m not going to be winning any awards for bravery any time soon!

But then I continued to reflect, what does it mean to be brave? A dictionary definition is “Ready to face and endure danger or pain.” Hmmmm…

What often scares us about situations is our past experience, yes there are completely irrational fears, but what is often scarier is facing something similar to a thing in the past. Something that frightened us, put us in danger or caused us pain. I was so scared of the interview and nearly ran out on it because of my two year track record of failed interview attempts and total loss of confidence in my ability to do what I’m trained in.

There was my danger or pain, I desperately didn’t want to face any more rejection. In all honesty, I think it could have finished me off. And on that morning I wasn’t ready to face or endure it, hence the panic attack. So nope, no bravery here!

But then, we know our stories, we know just how many personally scary things there are to us and we also know the real us, the ones who aren’t ready to face the fear with courage, maybe nobody thinks they’re brave? Because we’re the ones who can feel the sweaty palms, have the butterflies and know that our knees are knocking.

Jesus’ disciples were not renown for their bravery, choosing to run away, fall asleep or say something stupid when the chips were really down. But even Peter, oh brave Peter of the denial hat-trick, walked on water when Jesus called him out into the waves.

Peter wasn’t being massively rave when he walked on water, Jesus made him brave to show the disciples his power. I wasn’t being brave when I swallowed my fear and chose to attend the interview I nearly ran away from, God made me brave because he was calling me to greater things.

When you are ready to face and endure danger or pain you are showing courage, and this coward right here has a huge amount of respect for you. But when you are called to something greater by someone greater and you hear that call and answer that call in spite of danger, pain or fear, that is when you are truly brave.

Today I pray for all us cowards, I pray that we would have a reason to brave. That he would call us to something greater than our fear. And when the time comes that he would make you brave, calling you out on to the waves. 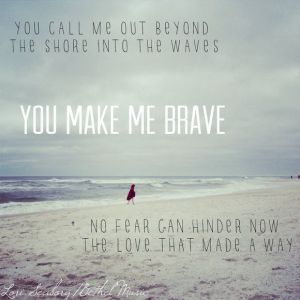