I’ll be there for you…

I am one of those people, and it tends to be people in their mid twenties to thirties, who is part of the Friends generation. It seemed at some point in time (and still is the case for those lucky ducks blessed with Comedy Central) that you couldn’t turn on the TV without an episode of Friends popping out of it. We are the people for whom the words “pivot”, “lobster” and “seven” will always have a more poignant meaning (and need to be quoted). We, sacred few, know all the words to phoebe’s Christmas song…

It is impossible for me to count how many times I will have listened to that most famous theme tune, potentially getting on for thousands. But I never really listened to the words, of rather they never really meant anything to me until this summer when I was listening to a beautiful acoustic version of the song and heard them like it was the first time.

This summer, the line “When it hasn’t been your day, your week, your month or even your year” suddenly jumped out to me and kept coming back, leading me to some reflection.
I had a bad day, leading to a bad week, which grew to a bad month and multiplied to a year that just wasn’t my year… Strictly speaking a year and a bit. And it’s only now that I am beginning to poke my head out of the other side of this bad year that I can begin to make sense of what on earth just happened.

Of course I’ve had times of wilderness before, I have known extended periods of desperate lows and it’s not like there weren’t any good times during this bad year (book publishing and coming out being ecstatically wonderful high points); but this felt really different, the sadness and hopelessness were fiercely unrelenting. I was in the pit, wandering through the valley from April 2014 to July 2015.

But as I say, I am popping my head out the other side, to coin a quote I’ve already used in a blog, “As bad as things were before, that’s how good they became”. Life is full of new starts at the moment and with those new starts comes fresh hope and renewed promise. For the first time in a year there is a rightness to what I’m doing and it feels like the sun is dawning after a very long night or I’m taking that first breath of fresh air after coming up from water.

But neither the crippling sadness nor wonderful newness is exactly what I want to write about today. If I take us back to the line of the song that started me reflecting, when it hasn’t been your year (or day, or week, or month) what should we do? Well, as those now timeless words of the chorus tell us, the friend singing the song pledges to be there for the person struggling. Yes they say they will be there for you, when the rain starts to pour, like they’ve been before and just as you are for them, they will be there.

Quite a promise when you think about it, and it is precisely this promise that is the thing I have been reflecting on and feel prompted to write about. It is one thing to say that you’ll be there for someone when they have a bad day. When a little act of kindness or night in with a bottle of wine putting the world to rights can maybe solve the problem. But it is quite another thing entirely to promise you’ll be there and continue to be there for someone when the sadness stretches further than either of you can see, when your efforts seem to be making little difference and their hopelessness makes them a pretty tough person to love.

But it is perhaps that “being there” that makes the most difference. Maybe loving someone and being there for them through a year, or even a decade, that isn’t going their way is the best thing you will ever do. It’s relatively easy to stand by someone during a tough week, harder in a tough couple of months, but so many will give up and fall away during those prolonged periods of sadness and pouring rain, but that is when people need their friends to step up and stand firm most of all.

That said, this isn’t a preachy blog, far from it. This is a blog of gratitude to some truly awe inspiring friends of mine who have done just that. Stood by me while the rain poured, things weren’t any better for months on end and I became a pretty tough person to love at times. So, if you’ll forgive me, I’d like to end with something of an open letter…

It got tough there for a while, there were points where I wasn’t sure if I was ever going to feel normal and things would ever be right again. I’m sorry for being disinterested, self absorbed and monosyllabic.

Thank you for being there for me, consistently, faithfully and steadfastly.

And now, that the year that wasn’t mine is over, that I’m starting to see clearly again, that I’ve remembered who Lex is, allow me to make a promise to you.

If ever there should be a day that is bad, if there’s a tough week, if a month just goes wrong, and if an entire year descends into hopelessness and sadness that is just too much; know that I will be there, when your rain pours, like I’ve been able to be in the past, like you’ve upheld me during the last 15 months, I will be there for you. 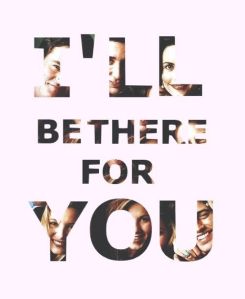 One thought on “I’ll be there for you…”