If You Feel Too Much…

This greenness denotes ordinary time, and it is this idea of ordinary time that I’ve been reflecting on over the last couple of weeks.

Around half of the church’s year is spent in green, realising that while, when you add up all the various festivals or preparation times together, we spend six months in “special” time, there is an equal amount of time that is spent in the unnamed, uncelebrated, seemingly mundane ordinary time. And I think there is a real message for life in there for us.

A few months ago a friend first used this idea of liturgical colours to describe the mood of her life, and I really liked the idea. Describing yourself as being in a green , “ordinary time” conjures this wonderful image of chugging along, contentedly getting on with the busyness of life, and while there may not be much to specifically celebrate, there is equally little to lament. While the church may be a half and half split, I think most of us live the majority of our lives in ordinary time. Days, weeks, months can go by without needing to get those white alter cloths of celebration out. And while that may seem a little boring, at least we’re not wearing the purple of suffering.

This week I will deliver an assembly about being thankful for boring days, days that are neither happy or sad but just rather ordinary (I’m using champagne, a tissue and a potato as my props) and I think this idea of ordinary time ties in here. Its great when its holiday time, when its Christmas day and there’s loads to smile about  and it is equally important that our lives be seasoned with some sadness (the latest Disney hit teaching the very important lesson that we are allowed to be sad and can learn lots from sadness), but I think we learn even more from the long stretches of potato days. When there’s nothing special going on and it’s just Tuesday. It is on those potato days when we learn to be thankful for the ordinary, content to dwell in the mundane. I think the challenge for people is that, with the increase of connection via social media and the sharing of the minutia (I know I am as guilty as any here) of our lives,  people having a potato day are bombarded by champagne and tissues and can end up begrudging others their celebrations and lamentations. Maybe what we all need to be doing on Facebook is sharing and celebrating the ordinary. How good would a host of “Life’s neither exhilarating nor crap and I kinda like potatoes” statuses make us all feel?

But if I’m here championing ordinary time, why on earth then is today’s blog called ‘If you feel too much’? Surely it should be more “when you’re feeling just enough”…

If you feel too much is the title of a published collection of blogs and writings from Jamie Tworkowski (The man behind the international movement ‘To write love on her arms’, a non-profit aiming to raise awareness and support for young people struggling with depression, self harm and suicide). His argument being that often people struggling with suicidal thoughts might feel like they are “feeling too much” and need to express that excess emotion some other way.

I find myself living an awful lot of life in ordinary time, but the problem is I feel too much.

By the rest of the world’s standards I’m like a puppy. Incredibly excitable, overly sensitive and prone to  weeing on the carpet. Part of the reason I love working with teenagers so much is because we share an emotional ebb and flow. Young people have much more extreme peaks and troughs in their moods multiple times during the day, resulting in those teenage moods swings we all know. But I love them for it, because I’m there peaking and troughing along with them. If you feel too much, a mundane Wednesday afternoon in March can go from the best day of your life to the worst in the space of about an hour.

How, then, do those of us who live life like puppies, feeling too much,  make ordinary time work?

Well I think the key lies in looking at things as if they were concentric cycles. There is one great big cycle going through the year (think of those liturgical colours again), times when there is celebration, lament and an awful lot of ordinary time. But there will be monthly cycles (Don’t be gross), weekly cycles and even daily cycles going on as well. And so while there are people for whom their daily cycle of emotion is a slow turn round the carousel, where this is little variety in emotion for days, weeks or even months at a time. There will also be those of us for whom the daily cycle sends us shooting up and plummeting down at break neck speed, on a rollercoaster of liturgical colour.

It’s not that necessarily one group feels too much and the other not enough, and neither is “right”. Its just two very different ways of feeling ordinary time.

If we think back to the afore mentioned Disney hit and ask ourselves  what ‘Inside Out’ is trying to tell us, if it is not the goodness and necessity of all our emotions? In the film, while each character is predominantly “controlled” by one particular emotion, they have all the others and each has a huge part to play. In the film Riley learns the painful lesson of how things, memories, can be happy and sad all at the same time. In growing up and becoming more emotionally intelligent Riley learns that feeling things is a really complex business.

So we live the majority of our lives in ordinary time, and for some there is contentment in this, while others feel huge guilt and boredom in the ordinary. Some are governed almost entirely by one emotion and there is little flux, while others’ emotions all get a chance to sit in the driving seat multiple times a day.

If your life is mostly the green of ordinary, delight in it and feel proud of your own personal, exceptional ordinary. Share with others your potato days, that while you may not be whooping you’re also not weeping. But if you, like me, feel like you feel too much, don’t be scolded out of it like the excitable puppy you may be. Yes our emotions may seem bigger and messier, but as Riley learns, feeling  is a complex thing that looks different for us all.

I love the church for its liturgical colours, helping us twig how we might collectively be feeling, but if your personal alter needs to be a different colour, go for it. Maybe you’re not green. It’s not feeling too much or not enough… its just feeling. 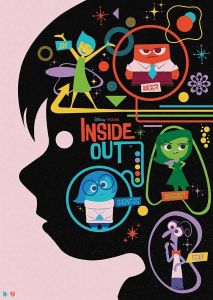