Let’s hear it for the girls…

I want to start off this blog in a rather unconventional way, I want to tell you what I’m wearing (go with it). I’m wearing a greyish-blue cardigan over a long sleeved white tee, baggy chinos and (because of the baggy chinos) some rather visible Superman pants. If you looked at me from the waist up you would clearly say “There goes a lady wearing a lovely cardigan”. If you saw me from the waist down you might say “There goes a boy with very feminine hips”. If you saw the whole ensemble for the first time you’d probably say something along the lines of “Wow… I don’t get it”. Let me explain…

Today, and for a few weeks, I’ve been thinking about and knowing I wanted to write something on (and I hold my breath as I write this)… feminism. I’ve been putting the blog off for a while and held my breath just then, because feminism is like a real subject. It isn’t the fluffy, light, “this song has spoken to me, let me share it with you” junk that I usually blog about. Feminism, the whole  woman thing, is something that so many people I love and respect have amazing, educated opinions on; and so popping my toe in to the discussion seems just a touch terrifying. But the thing that has been on my heart for a while, and the thing that I want to put my two cents forward on is the very thing that I never thought I’d blog about.

So, let’s dive right in (good luck everyone). Why did I start off by telling you what I was wearing? Well, for as long as I can remember I have been told by people that I am a tomboy. For the last ten years or so I have been told by people that I must be a lesbian. Let me tell you a little more about how I roll:  I love pink, my favourite things when I was little were dolls, Barbies and Polly pockets, I danced for 11 years, I hate all sports, chick flicks are my idea of a nice cinematic experience while action films are a nightmare, I actually really enjoy wearing dresses,  I cry on average 3 times a day, babies make my brain stop working properly and I want to find a nice man to marry more than anyone I know. Now I don’t know about you, but that seems like a pretty girly list for a raving lesbian tomboy! The presumptions that people have about me are based solely on my clothes and my hair and have nothing to do with who I actually am. Now I hear you asking if I don’t like people thinking these things about me then why don’t I make it easier on myself, start wearing more feminine clothes and grow a nice bob. Well the answer is simple, I don’t want to and why the hell should I?!

I am really comfortable with the way that I dress, I love my hair and think I look pretty good most of the time (something that has taken years to achieve) and I am more than confident in my sexuality so people leaping to conclusions and thinking that I favour the ladies doesn’t actually bother me. Why should I change the way I look to make other people more comfortable with who I am and how I live my life? Why should I have to have a list that proves how much of a girl I am? And actually, who has the right to say the things on that list make someone “girly” or not? I am sick of living in a world where the Argos catalogue is split into the girls’ pages and the boys’ pages. I am sick of living in a world where boy baby clothes are blue, girl baby clothes are pink and if you’re not sure its yellow. And I’m sick of living in a world where boys are not free to love dancing and girls aren’t free to love rugby, without there being major question marks over their romantic persuasion!

Now let me take a step down off my soap box for a second and take a breather. I want to tell you a story that will pad out that rant with a bit more substance. The week before we broke up for Christmas we had an end of term disco at school. Please do remember that I work in an all girls school. The first words out of my mouth, on hearing about the disco, were “But how can you have a disco at an all girls school? The whole point of a disco is to kiss boys!”. Yes, I am afraid to say, those unwholesome words escaped my mouth. In my experience as a teenager at my mixed secondary school, that WAS the whole point of discos; and super stressful they were because of it!! There was the prep that could last weeks prior to the disco, deciding who you were going to go with, who you were going to ask out, what you were going to wear and ultimately who you were going to try to snog. Then throughout the night it was just as stressful when, inevitably, you didn’t get a chance to kiss who you wanted to. But our end of term disco was a completely different story. Much to my surprise, there was hardly any stress in the days leading up to the disco and even less on the night! Girls who wanted to go went, without any worry of dates or what they were going to wear and girls who didn’t want to go didn’t; simple as that! Some of my 16 year old boarders went to the disco in their pyjamas(!) and others went in shorts and t-shirts. I asked them if they wanted to dress up more and if they’d feel underdressed, and they told me of course they wouldn’t they just wanted to make sure they were comfortable so they could dance!

If you ask me what the difference was between my school discos (where I spent many a miserable evening wearing skirts far shorter than I felt comfortable in) and the school disco my girls have just had (where they felt happy and relaxed enough to wear whatever they wanted), its that there were no boys! There I’ve said it! Pop somebody of the opposite sex into the mix and there would have been utter bedlam, girls would have been tottering around on tiny heels trying to impress and judging each other until they were blue in the face. The girls were having a simple, happy time with their friends and not spending time whispering about who was kissing which boys, who WANTED to kiss which boys and who didn’t want to kiss the boys at all and actually wanted to kiss the girls instead; and why? Because it wasn’t even on their radar(or gaydar, if you pardon the pun).

I’m not saying that boys are rubbish and shouldn’t be allowed (quite the opposite if you remember the beginning of this blog). But what I am trying to say, in a hugely ineloquent way, is that I think this whole gender thing gets really messy when the other gender gets involved. From my, limited, experience girls only really go bananas and starting calling each other lesbians when there’s the possibility that somebody could get with a cute guy. Perhaps we only feel the need to pigeonhole people based on their gender when there’s somebody around that we want to impress, how sad is that?

So let me sum all of this up and actually try to make a point. In Galatians 8, Paul tells us that there is neither male or female because we are all one in Christ. Well how, 2000 years later, have we not got that into our heads? Why are we still making such a big deal about boys being different to girls? What someone has in their pants does not and should not have any baring on what that person wears or spends their time doing.

Let’s stop restraining, and ultimately damaging,  the young people of this world by sticking to the same tired gender stereotypes of 60 years ago. Let’s allow people to pigeonhole themselves, deciding on what they want to wear and what they want to spend their time doing. It is my deepest wish that by the time I have children of my own that they are free to make their own decisions about their hobbies and dress without fear of ridicule.

My final thought and prayer goes out to those young guys and young girls who are trying to buck the trend. Those who spend their time perusing a hobby that others judge them for and dressing in a way that makes people call them gay. It sucks, I’m sorry, I hope things get better. 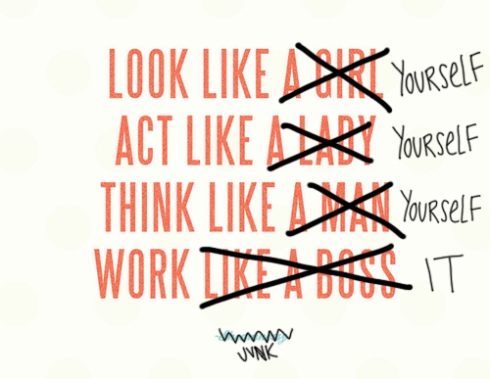 6 thoughts on “Let’s hear it for the girls…”